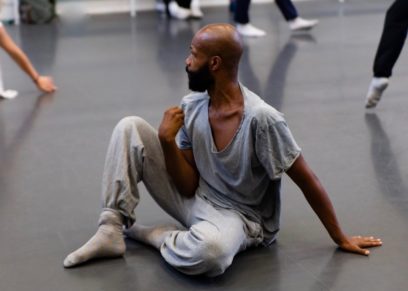 Gerrard’s class is for advanced / professional dancers who wish to experience a relaxed, encouraging, and inspiring environment.

Dancers will encounter a fusion of contemporary dance styles and will be guided by yogic principles of empowerment, openness, and connectedness.

The use of imagery, in the class, will aid the forming of mental pictures, in order to stimulate memory, thereby creating strong connections to happen when sequencing phrase work.

Gerrard Martin trained at De Montfort University, gaining a BA Hons in English Literature and Performing Arts; he continued his studies at the Northern School of Contemporary Dance

He has danced for Jose Agudo’s dance project with Akademi, , and has toured nationally with Tavaziva Dance, Union Dance Company, and Phoenix Dance Company, as well as dancing for the West End’s production of the Lion King, Ballet Black, Aletta Collins Dance Company, State of Emergency, and Rosie Kay Dance Company

Aside from commercial dance contracts, and film engagements, Gerrard has also danced for the National Theatre, toured internationally with the English National Opera, and the Royal Opera House.

Gerrard currently teaches on the Adult Classes & Courses programme at the Place and has taught on the Musical Theatre BA Hons at Mountview Academy of Theatre Arts, the CAT programme at Trinity Laban and the Children Youth Dance at the Place. Gerrard is a guest Associate Lecturer at the University of Northampton, and a dance, yoga, and movement teacher at RADA, (Royal Academy of Dramatic Art).

He created his project-based company Gerrard Martin Dance in 2011 and has had work featured at the Tate Modern, the Place, the Curve Theatre, BHM, National Portrait Gallery, RichMix and the A Time to Breathe, Emerge, Between the Lines, South Bank Urban, Let’s Dance International, and Cloud Dance Festivals. Gerrard’s work has also been selected for Ident festival, The Field Film festival, UK and the Athens Video Dance Project, Greece.

Gerrard aims to produce works of emotive and socially relevant dance-theatre; to teach and facilitate creativity through movement, yoga, and dance, and wishes to collaborate and engage with artists across different mediums.

He was an assistant choreographer on the English National Opera’s (Olivier Award winning) Porgy and Bess, One Love Musical, (Bob Marley), and the 40th UAE Royal Anniversary Performance, Abu Dhabi. He has been a movement director on productions such as ‘Shepard’s Chameleon’, ‘Lady Macwata’, ‘GHB Boy’, ‘BEAM’, ‘CAKE’, ‘6O Miles by Road or Rail’, ‘Foxes’ & ‘The Frontline’.

Gerrard is the co-founder of Black Artists in Dance, (BAiD) and the associate founder of The Healthy Young Dancer Project (THYDP). He is part of the first cohort of The Kerry Nicholls Dance Mentoring Programme and is a trained Yoga teacher.

Professional class is ‘drop in’ and can be booked from 6pm the night before the class you’d like to attend. You can still drop in and pay at Rambert, however as our spaces are strictly limited we recommend you book online before travelling to the building.

To book and check whether there are spaces left, click here.

Please make sure you have read our full health and safety procedures before coming to class, here.

Every Wednesday we will live stream professional class from the Rambert studio to your home via zoom. These spaces are available from 6pm every Tuesday, and are limited to fifteen spaces each session.

To book and check whether there are spaces left, click here.

Back to Professional Class page