Five years in our home on London’s South Bank

On our fifth anniversary of being in Rambert’s bespoke building, we take the opportunity to highlight all that we have to celebrate 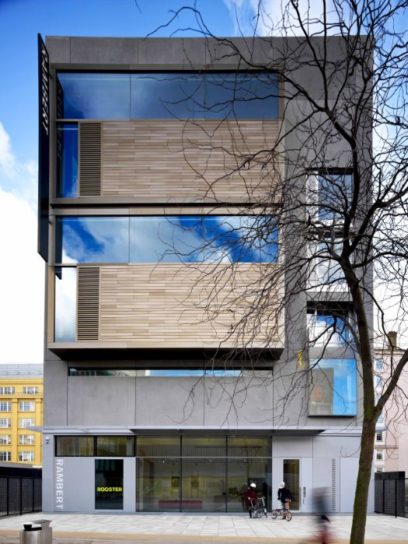 When Rambert’s brand new, state-of-the-art building was opened by Her Majesty The Queen in 2014, it was a significant landmark in Rambert’s history. Moving from our Chiswick studios where the company had been based for 40 years, we established ourselves on London’s South Bank, one of the UK’s most important cultural hubs, set by the Thames alongside icons like the National Theatre, BFI and the South Bank Centre.

But it’s when you step inside Rambert’s building that you appreciate it as a centre of creativity, innovation, community and wellbeing. With five dance studios, a costume design room, a gym, an osteopathy and sports massage clinic, meeting rooms, an office and an archive, there is a lot on offer behind our concrete walls.

Here’s a look at what’s inside…

First and foremost, our building is the central base for the world-class dancers of the Rambert company and our young ensemble, Rambert2. Inside our studios, our dancers take on the great dance works from our 90-year repertoire, which are then performed on stages all over the UK, and internationally. 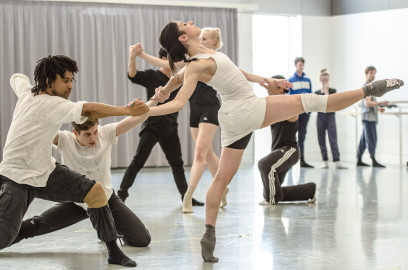 Alongside these revivals, renowned choreographers from all over the globe come to our studios to create, innovate and showcase their best work. Our ambition is to be the world’s most exciting dance company, and our custom built studios help to make this a reality. It’s here that we can create radical, inspiring, thought-provoking dance. Dance that matters.

Find out when we’re next performing here.

As Britain’s oldest dance company, we realise the importance of preserving our past while documenting our present, and during the design of our new building it was paramount that there would be a space to hold our almost 100 year-old history.

The collections held in the Rambert Archive demonstrate the company’s pioneering work in dance throughout the 20th century to present day collaborations, with over 480 dance works documented through original costumes, posters, images, objects, notation, music and footage.

Held in the boughs of the building, the archive space is purpose-built to preserve these precious artefacts for generations to come.

“It’s quite significant that the archive is on the basement floor. As well as perfect conditions for the collection, it also means that we’re at the foundation of the building - we’re the oldest dance company in Britain so it feels appropriate that we hold our archive in the roots of the company.”

Rambert was provided with a once-in-a-lifetime opportunity by Coin Street Community Builders to build its new home on the South Bank in return for a commitment to provide an affordable community dance programme in the local area.

As part of this partnership we collaborate on and host numerous activities, such as nursery sessions, play schemes, community days and a family support programme. People living in and children attending school in the Coin Street neighbourhood area can also access Rambert’s many classes at a reduced rate.

We host a range of publicly-available activities to support health and wellbeing, from morning yoga and body conditioning to dance classes for children and adults, taught by top teachers including current and former Rambert dancers.

More specialist classes include the freely-available Dance for dementia and Dance for Parkinson’s sessions. These classes incorporate movement, props and partner work to create a fun and supportive atmosphere, which is encouraged to continue over a cup of tea or coffee at the end of every class.

“You often lose your sense of rhythm with Parkinson’s and it’s really nice to be able to join others and suddenly find yourself in tune again.”

Beyond the space that our building provides to our own company dancers, there are plenty of opportunities for professionals from the wider dance community, from our daily Contemporary Professional Class to more collaborative events like our free monthly evening The Playground.

We are committed to helping dancers and teachers excel, which is why we offer a variety of courses: CPD for teachers, a summer school for young people, and we’ve also launched the first ever Gaga Intensive in Europe for professional dancers.

Our creative space is open to all, and we regularly hold workshops, courses, visitor days and performances. Performances such as Rambert2 in Kamuyot, and our Summer Installation where the whole building was turned into a stage, allow audiences to get even closer to our work and see our dancers perform up close.

Our building has also played host to a number of external events, and our studios have been transformed into catwalks for Margaret Howell and COTTWEILER, who showcased their Spring Summer 19 collection at Rambert last Autumn. Find out more about hiring our spaces.

It’s been an explosive, diverse and inspiring five years, which has seen Rambert grow from strength to strength, as a dance company and a centre for many different communities. With brand new international touring plans, co-productions and ground-breaking work in the pipeline, look out for what’s to come in the next five.