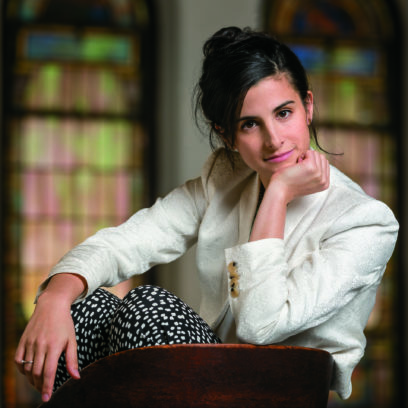 Choreographer, Artistic Director, and Founder of Brooklyn-based company GALLIM, Andrea Miller is a groundbreaking artist who brings unbounded imagination, physical virtuosity, and a sense of deep humanity to her work. Her creations penetrate the elusive meanings of existence with unbridled nerve and a rare poetic instinct.

Miller has been recognized with fellowships from the Guggenheim Foundation, Sadler’s Wells, New York City Center, and the Princess Grace Foundation. Named the 2017–2018 Artist-in-Residence at New York’s Metropolitan Museum of Art, Miller was the first choreographer to hold that distinction. In October 2018, she was featured in Forbes as a female entrepreneur and leader in the dance world.

Collaborations in fashion include work with Hermès, Vogue, Lacoste, Calvin Klein, and KSwiss.

Film credits include The Death and Life of John F. Donovan (2018), directed by Xavier Dolan, and In This Life (2018), starring Robbie Fairchild.

Miller has served as an adjunct professor at Barnard College, and has been invited to teach across the U.S., recently at Harvard University, the Juilliard School, New York University, Marymount College, Wesleyan University, and the University of California, Santa Barbara, among others.

Miller’s own educational programming is run from GALLIM’s Brooklyn home studio and has been brought to universities and educational centers across the US, recently at Harvard University, the Juilliard School, Barnard, New York University, Marymount College, Wesleyan University, and the University of California, Santa Barbara, and San Jose State University, among others. Currently GALLIM is running classes and programming virtually through gallim.org.

READ: Forbes, “How 3 women are changing the face of entrepreneurship”