Rambert is Britain’s oldest dance company. We gave our first performances in 1926. Our history dates even further back, to 1914, when Polish emigree and former Ballet Russes dancer Marie Rambert arrived in London fleeing the outbreak of the First World War.

In London she supported herself by giving tuition in dance and eurhythmics. At the same time she continued with her own ballet studies, as well as performing as a soloist. Two years later she opened a school of dancing in Bedford Gardens, Kensington.

The birth of British ballet 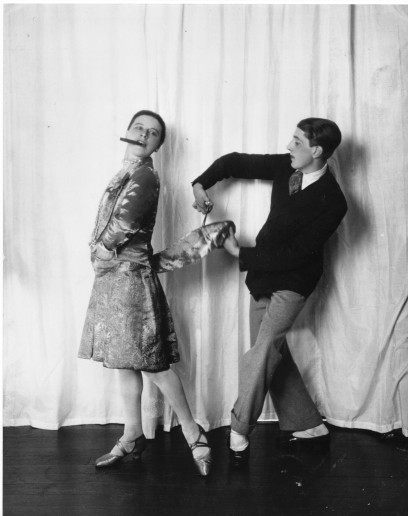 In 1926 Marie Rambert and her students presented the ballet A Tragedy of Fashion by Frederick Ashton, then one of her students, as part of a revue at the Lyric Theatre in Hammersmith. It is said that this piece marked the birth of British ballet, and also the formation of Rambert Dance Company.

From 1926 Marie Rambert and her dancers staged more occasional performances, until they formed the Ballet Club in 1930. This was essentially a group of talented artists who came together for regular Sunday performances at the Mercury Theatre in Notting Hill Gate, as well as short seasons in the West End and regional theatres (The Mercury Theatre was owned by Rambert’s husband, Ashley Dukes, and acted as a base for the company for many years.) In 1935 the company began using the name “Ballet Rambert”.

The company combined restagings of works from the Ballet Russes by Fokine, Nijinsky and Massine with the creation of new works by choroegraphers including Ashton, Andrée Howard, Susan Salaman and Antony Tudor, among others. 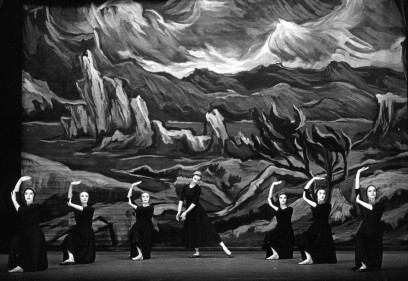 A 1957 production of Dark Elegies, Antony Tudor’s signature work, created for Rambert in 1937

During the Second World War Ballet Rambert became a full time touring company and, as the Company had outgrown the tiny Mercury Theatre, from 1946 its most frequent London performances were at Sadler’s Wells. During the war the Company did a great deal of valuable work appearing in a range of venues including factory canteens as well as theatres, and in this way made its own contribution to the war effort. The change in its performance activities, during and immediately after the war, resulted in a new audience. The small but knowledgeable audience of the Ballet Club was replaced by a more general audience whose tastes were less adventurous than those of the Company’s earlier supporters. They began to expect longer ballets in addition to the traditional mixed bills of new works. Ballet Rambert performed several classics, including the well-known Giselle and Coppelia and the first major British productions of La Sylphide and Don Quixote.

The company’s extensive touring meant there was less time to create new works, but this began to change in 1958 when Norman Morrice, one of Marie Rambert’s novice choreographers, created Two Brothers for the company. This work heralded a tentative return to the innovative policies which had previously been the hallmark of Ballet Rambert. Two Brothers was performed in modern dress and dealt with a contemporary theme while still using a traditional ballet vocabulary.

Norman Morrice, encouraged by Marie Rambert, travelled to America in 1962 on a Ford Foundation Grant in order to see the new developments in dance and to study with some of the major choreographers of the time, including Martha Graham. At this time it had become apparent that Ballet Rambert could no longer afford the expense of touring large-scale classical productions and that, if it was to survive, a change of direction was needed. Following his visit to America, Morrice encouraged Marie Rambert to return to the Company’s original ethos and the Company transformed from a medium-scale classical touring company to a smaller ensemble, aiming to create new works and preserve the best of their previous works. In 1966 Morrice was appointed Associate Artistic Director of the new Company He brought in several American choreographers to make works on the Company, including Glen Tetley, who mounted Pierrot Lunaire (created for his own company in 1961) and Ricercare (originally created for American Ballet Theatre in 1966) on the ‘new’ Ballet Rambert. Regular choreographic workshops were also held for the dancers, and Christopher Bruce began to emerge from the Company as a talented choreographer.

During the first few years of Ballet Rambert’s new incarnation, the company also retained several pieces from its earlier repertoire. Among these were four of Antony Tudor’s works, including Dark Elegies (1937); and also Nijinsky’s L’Apres-midi d’une faune, revived for Ballet Rambert in 1931.

In 1974 Morrice was succeeded as Artistic Director by John Chesworth, who had performed with the company since 1951 and served as Assistant to the Directors from 1966 to 1974. During Chesworth’s years as Director, assisted by Bruce in the role of Associate Director, the Company produced several major works, including two full evening pieces: Cruel Garden (1977, Bruce in collaboration with Lindsay Kemp) and Tetley’s The Tempest (1979). He also continued Morrice’s policy of inviting overseas choreographers to mount works on the Company. In 1979 Bruce left the Company to embark on a career as a freelance choreographer, although he still maintained a position with Ballet Rambert as Associate Choreographer.

In 1981 Robert North was appointed as new Artistic Director, a post he held until 1986. During North’s directorship, the choreographic focus centred on North himself, Bruce and Richard Alston, although occasional invitations were made to overseas choreographers to mount works for the company. Amongst these were Paul Taylor’s Airs (1982), Merce Cunningham’s Fielding Sixes (1983) and Dan Wagoner’s An Occasion for Some Revolutionary Gestures (1985). North developed a repertoire that proved popular with audiences both at home and abroad, contributing several popular pieces himself.

North was replaced by Richard Alston, and under his direction became known for its use of Cunningham technique and a repertoire of mainly abstract works, in line with Alston’s own belief that dance should be created for its own sake and not to support narrative or spectacle. He too invited choreographers from abroad to make works for the Company, including a number of influential American ‘postmodern’ choreographers such as Trisha Brown, Lucinda Childs and Cunningham himself, whose Touchbase (1992) was created specifically for Rambert. In 1987, the company was renamed “Rambert Dance Company” to more accurately reflect the style and nature of its current form. This was shortened to simply “Rambert” in 2013.

Alston left Rambert at the end of 1992. His successor was named as Christopher Bruce, who took up the position in April 1994. Bruce invited internationally recognised choreographers such as Merce Cunningham, Twyla Tharp and Siobhan Davies to produce works for the Company as well as providing opportunities for young choreographers like Jeremy James and Wayne McGregor to create new works for Rambert. Some of Bruce’s own creations, including Ghost Dances, Swansong and Rooster have proved to be among the company’s most enduringly popular creations.

Christopher Bruce was succeeded in 2002 by Mark Baldwin, like his predecessor a former dancer with the company who had subsequently developed a career as a choreographer, and in 2015 received an OBE in the 2015 Queen’s Birthday Honours. True to the founding vision of the company, an emphasis of Baldwin’s leadership was to commission works that encourage collaboration with other artforms, especially music and design. He commissioned works by choreographers including Karole Armitage, Rafael Bonachela, Kim Brandstrup, Aletta Collins, Javier De Frutos, André Gingras, Shobana Jeyasingh and Ashley Page.

During his tenure Rambert won two Olivier Awards and the TMA Theatre Award for Achievement in Dance. The company also successfully raised £19.6million to create a purpose-built home on London’s South Bank, which opened in 2013.

Rambert today has the most far-reaching touring programme of any British contemporary dance company, presenting new, large scale works of the highest standards to audiences throughout the UK, complemented by equally extensive education, outreach and participation work.